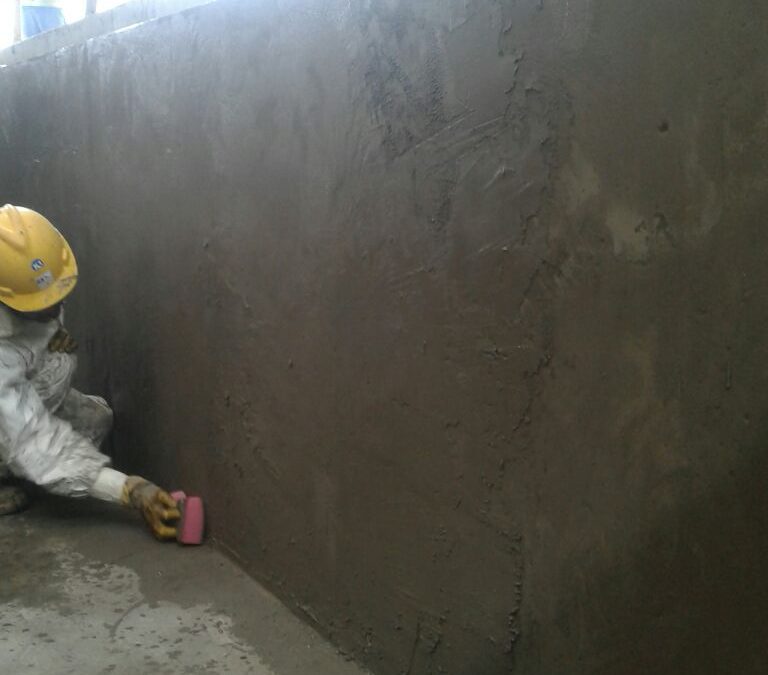 BKV Holdings devised a novel means of installing a Polyurea waterproofing over a Perlite cement fire-rated screed to wall system at a newly-built power station, and this approach has since become the standard on other similar projects.

The contractor also had to complete the application within seven days of laying the screed and was unable to wait for it to cure within the standard 28 day period.

A Polyurea waterproofing system is a hot-spray applied product with exothermic temperatures that exceed 100°C and the barrier had to, therefore, also withstand residual moisture in the Perlite cement outgassing.

BKV Holdings director, Brett Vermeulen, says that he approached Epoxerite to assist the company in developing a moisture barrier/faring coat that would be able to meet all of these requirements.

“The water-based, hydrophobic epoxy cement moisture barrier successfully adhered to the screed over which the waterproofing was applied, while also eliminating the exothermic outgassing phenomenon. An added benefit of the product that was only realised during the testing phases is that it sealed all surface blemishes and defects to provide a smooth monolithic finish. Certainly, our client was very pleased with the aesthetically-pleasing final Polyurea product,” Vermeulen says.

Epoxerite’s E330 PEM underwent two months of stringent testing before being deployed on the project.

Vermeulen worked closely with Epoxerite’s managing member, George Weideman, during the product testing phases, and lauds his long-term supplier for its willingness to constantly improve the performance of the PEM for BKV Holdings’ unique applications.

The leading construction chemicals specialist has since supplied about 6 000 litres of the product to the specialist contractor for several of its projects.

It is applied effortlessly over vast areas, some of which are up to 1 500m2 in size, using trowels and then floated to the desired finish.

Ease of use is another important trait of the product considering the nature of the bulk of the specialist contractor’s projects, which are usually undertaken during short shut-down intervals in the petrochemicals, chemicals, construction and mining industries.

Weideman says that E330 PEM is a three-part cementitious-based epoxy mortar with high performance traits that make it very suited to the levelling and profiling of concrete, as well as other masonry substrates.

“It is an ideal moisture barrier on ‘green’ or very moist concrete, while also performing exceptionally well as a moisture barrier under polyurethane and epoxy systems or to seal pores in concrete. The PEM has also been used extensively in concrete repair works, serving as a smooth levelling layer over existing substrates of up to three millimetres in thickness,” he says.

Some of the other key advantages of the grout include its rapid physical development traits; excellent adhesion to concrete surfaces; high moisture tolerance; and ability to cure under low temperatures.

It is also moisture tolerant, while providing extreme resistance to chemicals and facilitating the hydration of fresh concrete.

Considering the nature of BKV Holdings’ client base, Vermeulen says that all of the company’s partners must also be able to ensure a consistently high quality of supply of materials.

“Our clients mainly operate in industries that are known for demanding only the highest possible performance standards from their professional teams and supply-chain partners. In many instances, sub-standard workmanship could lead to a catastrophic failure at operations, plants and factories. There is, therefore, simply no room for error, or second chances,” Vermeulen says.

Among the company’s more recent projects is the lining of various concrete tank bases for one of South Africa’s foremost chemicals and phosphate producers.

Weidemann concludes that he is proud of Epoxerite’s long association with BKV Holdings and looks forward to working closely with the company on more of its future projects!